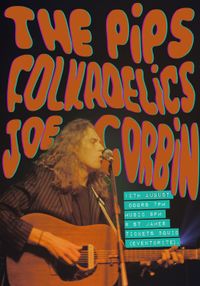 Join Kiya & The Folkadelics in St James this August to support The Pips, one last time in Guernsey!! The big stage in the hall will prove a right treat...

Since forming only a year ago to act as a backing band for Elliot Albert Orchard’s solo project, THE PIPS have evolved into their own entity. An individual, collaborative, alternative project that local music legend Tom Girard describes as an ‘eccentrically idiosyncratic new highlight of the island’s music scene’ . The 12th of August at St James is somewhat of a farewell show before they make the move to Manchester in late August.

This is set to be one of the most exciting shows of the summer with support from soulful blues virtuoso Joe Corbin and funky folksters Kiya and The Folkadelics!